This picturesque parish church was built in 1832 on the land of Mr. Samuel Barrow.
The present site was chosen as being a mid-point between Croft and Risley who's two communities it was built to serve. The sandstone for the building was transported by the Croft farming community from Delph Lane.
The Church is of Gothic design with a spire designed by one of the foremost architects of the day, Edward Blore, and built by James Pierpoint at a cost of £2667, of which the Parliamentary grant provided £1457, the remainder being raised locally.
It was consecrated on 29 November 1833 by the Bishop of Chester.
​
The Church is designated as a Grade II listed building of special architectural or historic interest and
​considered to be of national importance.
Croft was separated from Winwick as a parish in the year 1845, then having a rateable value of £276. The seating capacity was 518, made up of 226 in paid pews and 292 free. In 1904 the old high-backed pews on the North and the South sides of the Church were replaced by the present Oak pews. The stone flagged floor was also replaced by the present wood block one. A new heating apparatus with pipes and radiators round the walls was introduced at the same time; this was replaced in 1957 by off-peak electrical system. In the year 1999-2000, when the Church was totally refurbished, a new oil-fired heating system was fitted.

Mayer & Co of Munich made the East window. It is a three-light window, representing the Good Shepherd with St. Peter & St. Paul on the left and the right. The family of the Rev. T. P. Kirkman gave the central light in his memory; the other two flanking windows were given by the friends and parishioners of Croft in memory of the Rev. T.P. Kirkman & Mrs. Kirkman. The windows on the North & South side of the Chancel, representing St. John & St. James were given by Mrs. P. Ingham in memory of her parents.
Messer's Shrigley & Hunt of Lancaster made the remaining windows. The central light at the West end which depicts St. Cecilia was given by the parishioners of Croft in memory of Mr. T. Hurdus, who died in 1948 having been the organist for 44 years. Mr. & Mrs. Peter Ingham gave the two flanking Angels respectively. Below the gallery at the West end is a window given by the Sunday school children in 1954.
​The first window on the North side depicting Christ with the children of the world commemorates the service of Mr. & Mrs. Ingham to missionary work and to the fact that Mr. Ingham served as a Churchwarden & Sides man for 50 years, both were Sunday school teachers.
The second window on the North side commemorates Mr. C. S. Smith of Heath House, Croft for many years a worshipper in the Church.
​The South window is in memory of Mr. and Mrs. A Stout who had been members of the Church for over 40 years.

​The plaque on the North wall commemorates the use of the Church by H.M.S Gosling during the Second World War.
British Coal presented the plaque on the South wall to the Church when they vacated their offices at Anderton House (a former H.M.S Gosling camp). The Royal Navy gave a Chalice & Paten to the Parish when the camps closed.
The framed picture on the North wall was given by the executors of Miss. M. Marsh of Peak House, Croft in her memory.
On the South wall a war memorial tablet records the names of twenty men from the Parish who died in the First World War and three who died in the Second.
The Eagle Lectern was given by the family of Drummer Edgar Clough killed in action in Mesopotamia on 8th March 1916.
The Reredos in coloured marble and Caen stone together with the oak panelling on the East wall of the Chancel were given by the Rev. H. I. Wadeson in memory of his wife, whilst the panelling on the North and South walls of the Chancel were given by the parishioners in memory of Mrs. Wadeson.
The Communion Table, chairs and pulpit handrail were the Parish's memorial to the Rev. H. I. Wadeson.
The marble steps in the Chancel were the Parish's memorial to the Rev. S. Barrow who's daughter gave the Altar Cross in memory of Mr. & Mrs. Cawthorne, Mr. Cawthorne was the Schoolmaster in Croft from 1891-1917.
The Font cover at the West end of the Church was given by the soldiers of the Parish as a Thanksgiving of their safe return from the First World War.
The book of remembrance which is also at the West end of the Church records the names of those whose ashes have been interred in the Garden of Remembrance was given by Mrs. P. Hopley in memory of her husband Alfred Thomas Hopley who had been a Sides man and P.P.C. Secretary for many years.
The oak shelf and book rest on which the Book of Remembrance stands were given by Mrs. Moore in memory of her late husband, Thomas Moore who was Rectors Warden 1950-1960.
The Litany desk was given by Miss. Withington in memory of her late father Captain E. Withington J.P of Culcheth Hall who worshiped here for many years.
The suspended Cross in the Church is the memorial to Canon H.A.C Hughes, Rector of Croft 1944 - 1970.
The leather-bound Church Lessons Bible and the leather bound New English Bible were presented to the Church by Mr. & Mrs P. Ingham and Mr. & Mrs. S. Jones respectively.
A stainless steel Flagon commemorates the memory of Rev. John Taylor, Rector of Croft 1975-1978.

The first organ, which had been obtained second hand in 1881 for £110 was worn out by 1915 and replaced by one bought from a Manchester organ builder for £425.
​The current organ was built by Alexander Young of Miles Platting about 1890. For a token payment, it was acquired from the Ardwick Methodist Church in Bradford, Manchester. Removed and rebuilt by George Sixsmith of Ashton-under-Lyne, it was installed in 1968 for a final cost of £2250. It includes a violin rank built by the German organ builder Schultz, which came from the Parish Church of Hindley via the Methodist Church in Glazebury.
The brass tablet on the organ commemorates the life of Mr. C. H. Ingham who was the organist for many years.

The stocks were the best known of the old instruments of punishment. They common form of stocks consisted of two posts of stone standing some yard and a half apart and having a groove or slot cut into the inward face. Into these grooves were held a pair of thick boards standing on edge, the one on top of the other. The lower board was fixed. While the upper board could slide up and down in the grooves, or be fastened down with a padlock. Two round holes were cut into the boards, half in the upper and half in the lower board, so that when a man’s or woman’s ankles were fastened between them he or she would be unable to withdraw his or her feet. A seat was provided upon which the prisoner sat with his or her feet stuck out straight in front.

The purposes for which the stocks were used were of two kinds. Firstly, for those offenders for whom the punishment was prescribed in the statutes, the chief of whom were runaway labourers, vagabonds, drunkards and sabbath breakers. Secondly, the stocks always being at hand and applicable with little trouble and expense, they were frequently used as a milder alternative than the fine or imprisonment which was the legal due of any minor offender. The stocks therefore became an instrument of manorial discipline of the most effective kind even when this was not the original object of their erection.
The Warrington stocks were situated at Bridge Foot at the beginning of the nineteenth century. At some former period, the stocks must have been portable by being placed on wheels, similar to the Latchford stocks preserved in the Warrington Museum, which gave the added advantage that they could be set up for action in any position.

On one occasion a comrade of a prisoner got the stocks loose and drew them and the incarcerated prisoner through the town and had a jovial day’s fun, frolic and drinking. (Warrington Guardian 4th May 1861)

The ‘Constables’ were responsible for the administration of the statute of 1606 which referred to drunkenness: ‘An act for repressing the odious and loathsome sin of drunkenness’. By this act, the constables had to inquire of drunkards and present them to the Court Leet (a local criminal court for the punishment of small offences).
They were to be fined 5s for every time they were drunk ‘to the use of the poore of the parish’ where the offence was committed, or if not able to pay then after conviction to sit six hours in the stocks.
​
Eavesdropping was also punishable by a fine or the stocks. 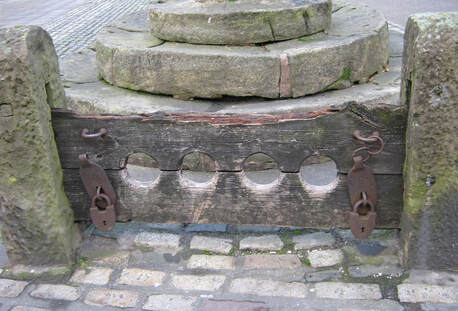 How the stocks would have looked.