The Alehouse Act & The Beerhouse Act

​The Alehouse Act 1828, which established a general annual licensing meeting to be held in every city, town, division, county and riding, for the purposes of granting licences to inns, alehouses and victualling (provision of food) houses to sell excisable liquors to be drunk on the premises.

Two years later, the Beerhouse Act enabled any rate-payer to brew and sell beer on payment of a licence costing two guineas.
Beerhouses were not allowed to open on Sundays, or sell spirits and fortified wines; and any beerhouse discovered to be breaking these rules was closed down and the owner heavily fined.

The intention was to increase competition between brewers; lowering prices and encouraging people to drink beer instead of strong spirits.

Within eight years 46,000 new beerhouses opened and, because operating costs were so low, huge profits were often made. The combination of increasing competition and high profits eventually led to what has been described as a 'golden age of pub building' when many landlords extended or redeveloped their properties, adopting many of the recognisable features which still exist today.

Attempts to check the growth were made from 1869 onwards, by introducing magisterial control and new licensing laws, aimed at making it harder to obtain a licence and controlling drunkenness, prostitution and undesirable conduct on licensed premises.

Croft Brewery was established in Heath Lane and in the nineteenth century it provided beer to local public houses and to others, outside the Parish boundary.
The family responsible for the brewery for nearly 150 years was the Owen family. Reginald Owen is shown as purchaser of the property that was eventually to become the General Elliot, in 1785.
The decline of the brewery started in the early years of the twentieth century when the large breweries bought the local pubs, making them into tied houses. This meant they could no longer sell beer from Owen's brewery because they were required to sell beer from the large breweries to which they were now connected.
The Brewery ceased operation in the 1920's and the brewery chimney was knocked down in 1936. The building is still a private residence called ‘Brewery Farm’.
​
Information on Croft Brewery from 'CROFT The history of a village' by Alan Sharpe

Harrow Inn
The Harrow is now The Culcheth Arms. In the past it had a bowling green.

Bricklayers’ Arms
The Bricklayers' Arms was marked as a 'Beerhouse' and is now The Cherry Tree.

George & Dragon Inn
The George and Dragon used to have a bowling green. 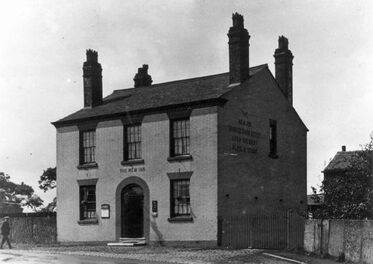