The Clare, Warburton and Daintith Family

Whilst researching Croft Unitarian Chapel, I came across a website belonging to Ray Warburton. It is a One Name Study project which I found fascinating. Thanks to Ray I have managed to connect together more stories behind the graves at the chapel. I have used the information from the site, along with further research of my own to share this story.
Visit the Warburton One Name Study

Ellen Clare was born in Orford on 6th September 1834 to James and Ann Clare.
She was baptised at Risley Chapel on 4th November 1834.
In the 1851 census she is at home with her parents. They live at Clare’s Farm. She has two younger brothers, Joseph and John.
In the 1861 census, she is still living at home and Isaac Warburton of Warburton is living at Wood End Farm, not too far from Clare’s Farm.
On 1st May 1861 Ellen Clare married Isaac Warburton at Newchurch in Culcheth.
Their daughter Ann was born on 15th February 1862, followed by Alice on 6th May 1863.

Sadly, Ann passed away on 29th February 1864 aged just 2 years. She is buried in Grave E10 at Croft Unitarian Chapel.

In the 1871 census they are living at Well Farm in Woolston. Isaac is a farmer of 98 acres, employing ten men and one boy. Only Ellen Clare and James Clare, along with Alice, are shown. Ann Clare Warburton is living with her grandmother, Ann Clare, at Parkers Farm (See below).
They had another son, Joseph Clare on 17th July 1871 and a daughter, Mary Jane Clare, on 16th July 1874.

Former Farmhouse, now offices and meeting rooms, 1709 (on tablet at first floor). Brown brick with stone slab roof, 2 storeys 3 bays with added lower wing west. Replacement recessed sash windows with stone sills and cambered arches with turning pieces. One window built up at ground floor. Modern half glazed 3 panel door in moulded timber frame. Stone table inscribed CHL and the date near eaves level. Timber eaves gutters and gable end stacks.
In 1881 the family are still at Well Farm, though Isaac is now a farmer of 120 acres, employing eight men and three boys. All the children are listed apart from Ann Clare, who is still at Parkers Farm.
There is no change in the 1891 census.
In 1901 the only children still at home are Ellen Clare and Mary Jane Clare.
​James Clare and Joseph Clare are both living at Parkers Farm.
Ann Clare is now living at Wigshaw House in Culcheth with her Uncles, John and Joseph Clare. (See below). 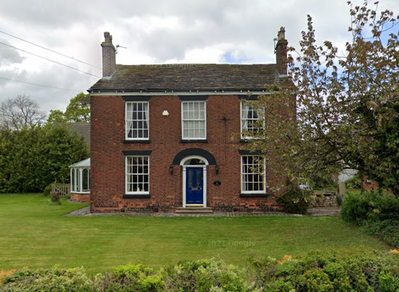 ​In 1901, Alice is living with her husband, Henry Daintith, who she married in 1888.
​They live at the Rope and Anchor Inn, Woolston.
Isaac Warburton passed away on 15th March 1904 and was buried with their daughter Ann in Grave E10 at Croft Unitarian Chapel.
Probate for Isaac of Well Farm was granted to Ellen, his widow. His effects were £2357 10s 3d.
In 1911, Ellen is listed as the farmer, with son James Clare as the farm manager. Daughter Ellen Clare is also living at home. They have a servant, Annie Daintith of Croft.

Joseph Clare Warburton is living at Parkers Farm in 1911 with his wife Elizabeth (Houghton) whom he married in 1903.

Alice’s husband Henry Daintith passed away in 1904 and was buried in Grave A4 at Croft Unitarian chapel. She got remarried in 1907 to George Turley and is living with him in 1911, along with her daughter Ann Clare Daintith,
now 21.

I cannot locate Ann Clare Warburton in 1911. Her Uncle John, who she lived with in 1901, died in 1903 and Joseph is listed as living alone with a servant.

Ellen died on 26th August 1915 and was buried with her husband and daughter in Grave E10 at Croft Unitarian Chapel.

Alice’s second husband George died in 1929.
Alice passed away herself on 3rd November 1938 and was re-united with her husband Henry Daintith in Grave A4 at Croft Unitarian Chapel.