Map of Local Places of Worship, Past and Present

Click an icon to view brief details. Further information on all places can be read below.
The Orange icons indicate buildings that still stand, but are no longer used as a place of worship.
The Dark Green icons are places where the burial ground remains, but the building has been demolished.
The Red icons are places of which there is no building or burial ground remaining.
The Light Green icons are active places of worship.

Croft Methodist Chapel was constructed on Stone Pit Lane in 1817. The congregation had been worshipping since at least 1815, when the nearby barn of James Hunt was registered as a place of worship.
​The building was taken over in 1837 and was registered as Croft Wesleyan Chapel on 23rd April that year.
​It is unclear exactly how many years this remained open, but it was certainly unused by 1845, as it was taken apart and the materials used to build Culcheth Independent Methodist Chapel at Twiss Green.

Here is an extract from ‘A Short History of Independent Methodism’ published in 1905.

‘James Wood, a tenant of an old farm near Kenyon Hall, allowed his kitchen to be used for worship by a group of his peers. His co-workers included Timothy Leather, John Fearnhead, Richard hunt, John Goulden and John Massey, among others. Public worship was continued in the kitchen until 1845, when a chapel at Croft, which was disused, was taken down and removed to a site given by Richard Hunt. This, after a few years, had an extension of 13 feet. In 1884, the old walls were encased with new brickwork, the chapel repaired, and additions made at a cost of £600. In September 1900, further alterations and additions were made, and an organ, the gift of John Hunt, placed in the enlarged organ chamber.’
​
The congregation changed its name to Culcheth Christian Fellowship in around 1995. The building was converted into living accommodation and sold in 2003. A new church was built in the same year on Hob Hey Lane.

The Independent Methodist Chapel in Culcheth when first built and the same building today, now a private residence.

Risley Primitive Methodist Church (also known as Risley Prosperity Chapel) was built in 1848 on Longcut Lane. The original building was extended in 1869, a year before their transition to Independent Methodism. From 1870 it was known as Risley Independent Methodist Church. The congregation built a new church in 1910 on Fearnhead Lane, which they still worship from today. The original building on Longcut Lane still remains, having been converted to living accommodation.

The first Risley Primitive Methodist Church and the building as it looks today
The Olive Branch Community Church operates from Croft Youth Centre on Smithy Lane. They are an Independent Methodist Church, established here in 2001.

Thomas Risley built Risley Chapel in 1707 after preaching in Richard Jackson’s barn since 1689. In 1839, the Unitarians were ejected from the chapel, and it was taken over by the Presbyterians as Risley Presbyterian Chapel. The building was demolished in 1971 and another one erected in Locking Stumps on Glover Road. The Thomas Risley Church opened in 1979 and was extended in November 2000. It is still active today as part of The United Reformed Church. 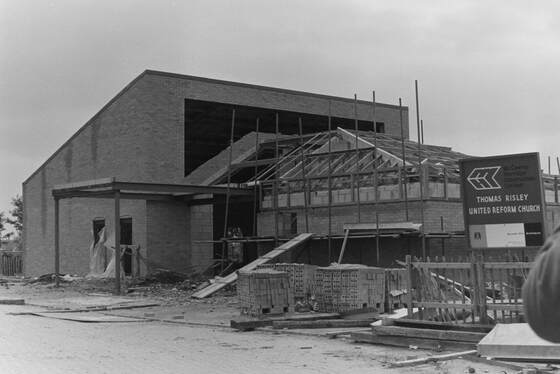 The new Thomas Risley Church under construction.
When the Unitarians were ejected in 1839, they built Croft Unitarian Chapel on Lady Lane. The building was demolished in around 1965.
Catholics worshipped at Southworth Hall and Culcheth Hall until 1827, when St. Lewis’ Catholic Church was built on Mustard Lane. It is still active today.

The first modern church since the English reformation in Culcheth, Culcheth Methodist Church was opened in 1966 and is now the largest Methodist church in the local area. It is now home to the old bell from Culcheth Hall chapel, the squire's private Catholic chapel, which has passed through the other churches to Culcheth Methodist Church for safekeeping.
The bell is no longer hung in the church, due to the inability of the Methodist Organisation to accept risk of it falling or hurting someone if they bumped into it. The church is part of the Leigh and Hindley Circuit.

St. Oswalds Church at Winwick dates back to Saxon times, though the building itself has been updated and partially rebuilt many times over the years.
It was the main Parish Church for a wide area, including Croft until 1833, when
Christ Church was built on Lady Lane.
St. Oswald's Church is a Grade I listed building. 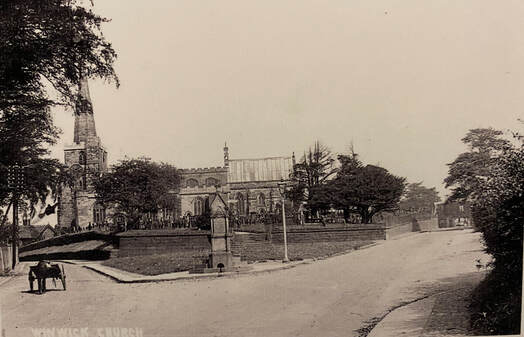 ​Newchurch Parish Church was originally constructed around 1530. It was rebuilt on the same site in 1753. The whole church apart from the tower was burnt to the ground in 1903. The Church was again rebuilt in 1904 and is still active today.

The Church of Saint Helen, Hollinfare was built in 1497 and rebuilt in 1735. It was constituted Parish Church of Hollinfare on 17th March 1874. The building was restored in 1882. A major refurbishment took place in the 1980’s, including a new slate roof. Further works have been carried out more recently. The church is still active.
Glazebury Methodist Church was built in 1865 on Warrington Road and was also known as St. John’s Methodist Church.  ​It amalgamated with Glazebury Primitive Methodist Chapel in 1967 and is still active.

Glazebury Primitive Methodist Church was built in 1837 on the site of what is now part of Bent’s Garden Centre. It was rebuilt in 1878 and four years later a Sunday School was added. It closed in 1967 and the building was demolished around 2014.
​
Glazebury All Saints Church was built in 1851 on Warrington Road, a little further towards Leigh from the Methodist Church. It is still active and is a Grade II listed building.

Glazebrook Primitive Methodist Chapel was built in 1808 on Dam Head Lane. It Closed around 1907.

Rixton Methodist Church was built in 1843 on Chapel Lane in Rixton. The building was replaced in 1904.

St. Michael's Roman Catholic Church was built in 1831 on Moss Side Lane, Rixton. It closed in 1975 when the congregation moved to St. Peter's in Woolston.