​When Ellen Yates was born on 22 September 1812 in Croft, Lancashire, her father, Samuel, was 29, and her mother, Ellen, was 34.
In 1841 she is living with her parents, Ellen and Samuel in Lady Lane. Her brother Joseph and sister Mary are also there.
In 1851 they are still on Lady Lane, but her mother passed away in 1850 and her sister has moved out.
Ellen married Samuel lee on 27 Apr 1857 at Newchurch in Culcheth when she was 46. Samuel was 47 and widowed.
Ellen became stepmother to Elizabeth and Margaret Lee.
​In 1861, Ellen and Samuel Lee are living at Lately Common in Bedford, Leigh. Samuel is an agricultural labourer and Ellen is listed as housekeeper. A Granddaughter aged 1, Emma Lee is showing as being there. It is possible she just stayed overnight, or she could have been living there. Stepdaughter Elizabeth died in 1862, she could have been ill beforehand (assuming Emma is her daughter) and her parents were looking after their granddaughter.
Her stepdaughter Margaret passed away in August 1870 and then Ellen lost her husband Samuel on 23rd October 1870.
Samuel and his two daughters were buried at Croft Unitarian Chapel in grave C3.
​In 1871, Ellen is still at the family home in Bedford. She is listed as a potato dealer. She has a granddaughter listed as aged 11 but named Esther E Lee. It is very likely it is the same granddaughter as 10 years earlier. Sister Mary Ellison is there and Elizabeth Ellen Whittle, aged 2. The last two are probably visiting.
In 1881, Ellen is in Bedford, Leigh at 31 Warrington Road. She is listed as an annuitant (person in receipt of an annuity payment). Her Granddaughter Esther is there, listed as an unmarried cotton mill worker.
Ellen passed away on 26th May 1888 aged 75 years. She was buried with her husband Samuel, Margaret and Elizabeth in Grave C3 at croft Unitarian Chapel. 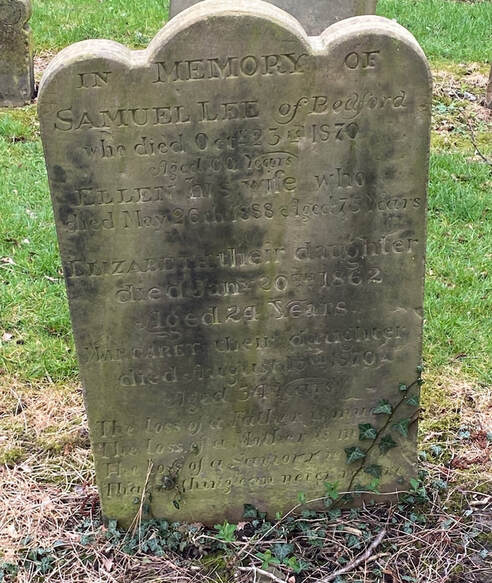