The Story of James Yates

​ When James Yates was born on 3 November 1810 in Croft, Lancashire, his father, Samuel, was 27 and his mother, Ellen, was 32. He was baptised on 7th December 1810 at Cairo Street Unitarian Chapel, Warrington.

In 1841 James is listed as a gardener living in Horwich, Deane, Lancashire.
He married Margaret Bentley on 1 January 1844 in Deane.
Their daughter Hannah Yates was born on 30th March 1845 but sadly passed away on 10th April 1847.
She is buried at Croft Unitarian Chapel in grave C6.

In 1851 James and Margaret are living at Twiss Green, Culcheth with their sons James and Samuel. James is listed as a Hay Dealer and Margaret as a Hand Loom Weaver of Silk. They have a lodger who is also a weaver, Sarah Massey. They have Margaret Lee listed as a house servant, which is James’ sister Ellen’s daughter.
​They also have Richard Urmston listed as a visitor, which I assume is James’ Uncle, his Mother Ellen’s brother.
In 1852 they had a daughter. As James’ Mother Ellen Yates had passed away in 1850, they named her Ellen after her grandmother.
In 1861 they are living at Hop Yard Farm, Barracks Lane, Croft. James is shown as a Farmer of 26 acres of land employing two labourers. Margaret is shown as Farmers Wife. The three children, Samuel, James and Ellen are with them and the two labourers. William Whittle aged 50 is a Cow Man and Ralph Macclew aged 19 is a Horse Man.
Ralph is also listed as nephew to James. It is likely he was a member of Margaret’s family.

The three children were now alone.
Samuel Yates married Mary Ann Johnson at Christ Church, Croft on 13th April 1869 and is living with his wife and children in the 1871 census. They are on the same street, Mill House Lane and Samuel is a farmer of 7 acres. They have a son, Harry Yates who is one year old and another son, James Johnson Yates who is just 1 week old. They have a servant living with them, Martha Charnock aged 13.

In 1871, the other two children are listed as living at Hop Tree Farm, Croft. It is unclear whether this is the same farm with a new name, but as James Yates Junior is listed as the head of household, a farmer of 26 acres, I assume it is the same as 1861. Ellen Yates, his sister is with him. She is 18 but no occupation is listed. There are two servants, John Collier, 17 and Alice Andrews, 13. There is also a lodger Thomas Walsh, a labourer at the foundry, his wife Hannah and their baby daughter Martha. A visitor is listed as Mary Ann Whittle, which is the name she is using, but she is Mary Ann Yates, daughter of James’ uncle, Joseph Yates (James’ Cousin).

This is where tragedy strikes. Young Ellen Yates had seen her parents die within weeks of each other. She had a job at a Dye Works in Birkenhead, but she must have been desperately unhappy.
​She committed suicide on 8th August 1874, aged just 22 (age is as given on certificate).
​The information below is exactly as written on the death certificate.
The inquest was held at Kirkdale during the Michaelmas session on 13th August 1874. The only details available are the costs. They paid two shillings and sixpence for the use of the rooms and three shillings to witnesses for attending.
Ellen was laid to rest at Croft Unitarian Chapel with her parents and her younger sister Hannah in Grave C6. 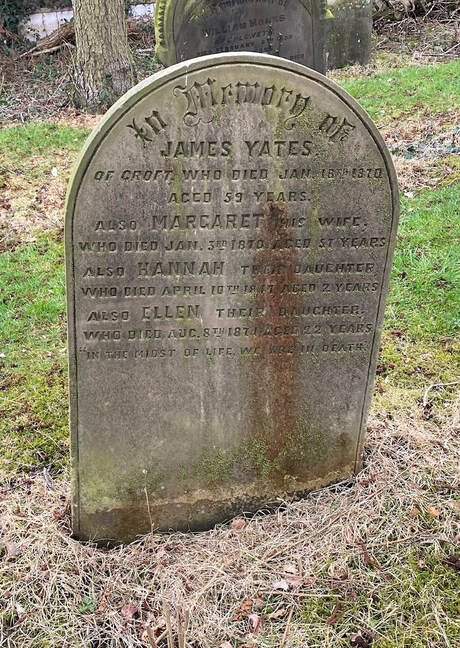 As mentioned, Samuel and his wife Mary Ann are living on Mill House Lane in 1871 with their children Harry and James.
By 1881, they have three further children, Annie and twins Samuel and Mary. They are living on Warrington Road, Croft and Samuel is listed as a butcher.
In 1891 the address is Barracks Cottage, Mill House Lane. Samuel is shown as a Pork Butcher with his wife Mary Ann and only the twins Samuel and Mary are still at home.
Ten years later in 1901, the details are all the same apart from son Samuel has left home.
In 1911, they are still at The Barracks as previously and older son James is now listed. It says he is single and a colliery worker. Both mother and daughter’s professions are blank.
Samuels Wife Mary Ann died on 21st July 1912 and was buried at Christ Church, Croft.
Their son Samuel died on 9th July 1920 and has a Commonwealth War Grave at Christ Church.

On 13th September 1923, Samuel passed away and was buried with his wife, in the grave next to his son's war grave.

James was ‘single’ in the 1871 census with a ‘visitor’, Mary Ann showing as staying with the household. This is Mary Ann Whittle, daughter of Joseph Yates and Sarah Whittle, who are James’ Uncle and Aunt.
Both children of Joseph and Sarah use Sarah’s surname Whittle. This could be due to being born out of wedlock. It is quite possible that Joseph and Sarah were together for some time before marrying. In 1851 after Mary Ann was born, she is listed in the household of Sarah Whittle and her parents, but Joseph Yates is listed as single and living next door.
It is also possible that Sarah had children to somebody else previously and Joseph took them on when they married. I have found a marriage record for Joseph Yates and Sarah Whittle in Warrington in 1868., which isn't proof of either theory.

The reason it is important here is because James Yates marries Mary Ann Whittle, in 1871 after the census was taken. On the marriage certificate, the name for Mary Ann's father is blank, which means she either didn't know or didn't want to give it. We will probably never know.

Marriage Certificate of James Yates and Mary Ann Whittle
Their first daughter Margaret was born in 1872 followed by Sarah Jane in 1873, Mary in 1875, Joseph in 1876 and Anne in 1878.
Mary unfortunately passed away on 8th November 1875, aged 5 months. She was buried at Croft Unitarian Chapel.
Anne also died young, aged 2 months and was buried at Croft Unitarian Chapel in 1878.
​
By 1881 they are living in Kearsley and have another daughter, Fanny. In the census they are living at 20 Lords Street, Kearsley and James is listed as a labourer.
In 1884 they have another daughter, Emily. She passed away at 2 years old and was buried at Croft Unitarian chapel.
They have a son, James in 1889.
In the 1891 census they are at the same address in Kearsley. James is listed as a Farm Labourer and Mary Ann’s occupation is blank. Daughter Margaret is a Weaver, Sarah Jane and Joseph are listed as Cotton Winders. Fanny is a scholar and as James is only a toddler, his occupation is blank.
Mary Ann Yates passed away in Farnworth in 1895 and was buried at Farnworth Cemetery.
In 1901 James (Widowed) is still at the family home with daughters ‘Maggie’, Sarah Jane and Fanny as well as son James. Maggie/Margaret and Sarah Jane are listed as Cotton Weavers and Fanny as a Cotton Winder. James is still too young to have an occupation listed. All the children are shown as single.
In 1911, still at 20 Lords Street, James is a Farm Labourer and James Junior is a Carter General. Fanny is now married and living at home with her husband, Thomas Colley (Coal Miner Hewer) and 3-year-old daughter Mary Ann Colley.

​I am in the process of locating an accurate death record for James. I cannot locate him for certain on the 1921 census, so it's likely he passed away after 1911 but before 1921. The search continues...