The Story of Philip Yates

When Philip Yates was born on 5 April 1803 in Croft, Lancashire, his father, Samuel, was 20 and his mother, Ellen, was 25. He married Alice Urromson on 1 January 1830 at Trinity Church, Warrington.
Their daughter Ann Yates was born in 1831.

In 1841, the family was living at Stone Platt and Philip’s occupation was a silk weaver.
They are still at Stone Platt in 1851, however, the occupation listed is unreadable.
Again, they are living at Stone Platt in 1861, but he is now a farmer of 4 acres. Alice is listed as Farmer’s Wife and their niece Ann (who was either living there or stayed on census night) is listed as a silk weaver.
Ann is listed in 1861 as living at Yew Tree House with her husband Joseph Whittle, a farmer of 80 acres. There are two servants listed, Alice Clarke of Culcheth, 17 and Peter Pomphret of Croft, 18.
​

Stone Platt, as it looks now
In 1871 Philip and Alice are living with Ann, her husband Joseph and their children, Philip, Charles, Alfred and Ellen at 6 The Row, Culcheth. Joseph is head of the household and listed as a farmer of 40 acres.
John Mort and Thomas Houghton are also at this address, listed as servants (Both with occupation as agricultural labourer).
The ages of the Children in 1871 were often estimated. Here, the eldest, Ellen is shown as age 11. This is likely a guess as she is not listed as being born on the 1861 census.
There is no marriage listed for Ann and Joseph, which probably means they were married at Croft Unitarian Chapel, which we have not yet found the marriage registers for.

By 1881, the address is spelt ‘The Rowe’. Joseph is listed as a farmer of 82 acres, with his children Ellen, Philip, Charles, and Alfred as well as Alice.

In 1888, Ellen Whittle married James Sharples and by the 1891 census, they live at 110 Manchester Road, Tyldesley with their son Joseph, aged 1 and Sarah Yates, widow of Joseph Yates (Brother of Philip Yates). 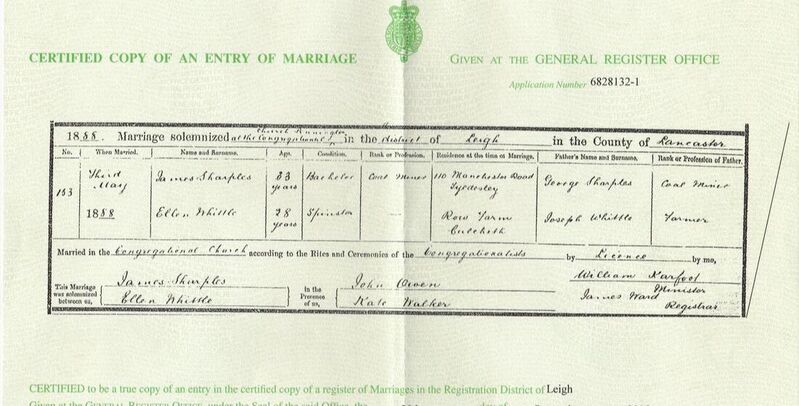 Copy of the marriage certificate for Ellen Whittle and James Sharples
In 1891 the address is shown as Rowe Farm. Joseph is listed as head with Philip, Charles, Alfred and Alice. There is also a servant Susannah, aged 22 from Middleton.
Joseph Whittle passed away on 17th January 1894 and was buried with his wife and children.
Alice Yates died on 5th January 1896 at the age of 85 and was buried with Philip.

Tragically for Ellen Whittle, 7 years after marrying James Sharples, he was killed in the Tyldesley Colliery Explosion on 1st October 1895. Their son Joseph died at the age of 13 in 1903. They were both buried at Croft Unitarian Chapel in Grave E3.

Ellen Sharples lived until 25th May 1942 and was buried with James and Joseph.​