The Story of Samuel Yates

When Samuel Yates was born on 19th September 1808, his father, Samuel, was 25 and his mother, Ellen, was 30.
He was baptised at Risley Chapel on 2nd October 1808.
The only clue to Samuel’s life is the burial register of Croft Unitarian Chapel. It says
‘Samuel Yates, Samuel’s son, St. Helens, native of Croft’.

The 1841 census only gives a small amount of information in general, but there is a match. A Samuel Yates aged 32 living on Duke’s Street, Windle, St. Helens and working as a labourer in a brewery. He and a similar aged male are living with a family there, probably as lodgers.

He died on 15 January 1844 at the age of 35 and was buried at Croft Unitarian Chapel in grave C8.
Grave C8 is that of his older brother Joseph, who did not die until 1875. Samuel is the third person listed on the gravestone, which along with the fact it says his age was 36 instead of 35, leads me to believe he didn’t have a stone until then.
Samuel's death certificate confirms that the census sheet above is his. He died from typhus fever at home in Duke Street, his father Samuel registered and was present at the death. 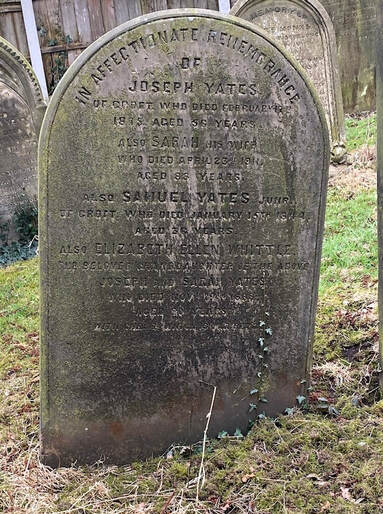