The chapel opened to large crowds with sermons from the Rev. James Martineau and the Rev. J. H. Thom.

​NOTICE is hereby given-, that a separate building, named the Croft Unitarian Chapel, situated at Southworth with Croft, in the parish of Southworth with Croft, in the Registrar's district of Winwick, being a building certified according to law as a place of religious worship, was, on the 4th day of September 1846, duly registered for solemnizing marriages therein, pursuant to the Act of the 6th and 7th William 4, chap. 85.
​
Witness my hand this 19th day of September 1846,
John Fitchett Marsh, Superintendent
Registrar of the Warrington district

The area of Croft is declared to be economically depressed.
​A £10 grant is awarded for the 'faithful few' struggling on at the chapel.

James Sharples is among five men who lose their lives in a colliery explosion at the Wellington Mine at Tyldesley.
His remains are interred in the burial ground (Grave E3).

The annual harvest festival, held at the chapel with visitors from Leigh Unitarian Chapel, raises £4 13d.

A £38 deposit is paid to the Mersyside and North Wales Electricity board, for supplying electricity to the chapel.
Click here to See the original documents

Two boys set the chapel on fire, destroying the organ, furnishings and fittings.
Liverpool Echo and Evening Express
SATURDAY NOVEMBER 11, 1961
​
Two boys, aged 13 and 14. were accused at a special court at Warrington today of maliciously setting fire to The Unitarian Chapel in Lady Lane, Croft, Warrington on November 9.

Chief Inspector Beuden the alleged offence came to light on Thursday when it was noticed that water was leaking from a broken tap at the rear of the chapel.
Detective Constable Eden and other officers Investigated and discovered that the chapel was completely wrecked.
Every window, electric globe and bulb had been smashed. Two organs had been overturned and broken up.
Panelled woodwork and pews had been wrenched from their fittings and smashed.
The pulpit had been demolished and broken up, "In other words." said the Inspector,
"the inside of the chapel was a complete state of chaos. The damage committed was appalling."

Yesterday Detective Sergeant Graveston and Detective Con. Eden were in the vicinity of the chapel when
they heard the sound of breaking glass coming from the disused camp at the rear of the chapel.
They found the two boys at the camp, and questioned them about the damage in the chapel.
One said: “We did it. We were having a bit of fun.”

The inspector said that further inquiries were necessary into this and other matters.
“I don’t think they are fit to be at large.” He said.
It was disclosed that the two boys had been playing truant from school for the past week.
They were remanded in custody until the next juvenile court on December 13.

A final attempt is made to restore the chapel.

TWO years ago teenagers wrecked the 130-year-old Unitarian Chapel at Croft, near Warrington. Now another band of teenagers are playing their part towards restoring the chapel, which, it is hoped, will be opening again after lying derelict for five years. About 20 members of the West Lancashire Unitarian League-boys and girls-have completed their first working weekend at the chapel clearing out damaged pews and hymn books caused by vandals who broke into the church and caused thousands of pounds worth of damage with hatchets.
During the weekend the boys camped out and the girls were billeted in nearby houses – in some cases with families connected with other churches.
Now the young people are awaiting the decision of the chapel officials before planning their next working
weekend – “Probably in the spring,” says camp leader Mr. Alan Cullan.
Liaison officer between the Young People’s League and the North Eastern Lancashire Unitarian Mission, 27-year old Mr. Neville Kenyon of Minden Close, Bury, says the future of the chapel - closed about five years ago because
of a drift in the population - is still to be decided.
“Originally the chapel was built for a population of about 180 but over the years that figure has
decreased, and so the chapel was closed,” he said. “But now we have found out that the chapel is likely to be in the centre of the proposed Risley New Town. It is just a question of whether the officials feel the
chapel is in a position to open again."

End of an Era

As the sources above show, the chapel was demolished at some point after the 1964 attempt to restore it. I have not been able to locate any records showing the exact date yet, nor any further mention of the chapel itself. I have read many different versions of when and why it was pulled down, none of them correct. Many official papers and books say it was demolished to build the housing estate. Not true. The housing estate was built around the chapel grounds, which has the same land boundary now as it always had (the only slight difference being the widening of the pavement and repositioning of the gate, which I am still looking for further details of). 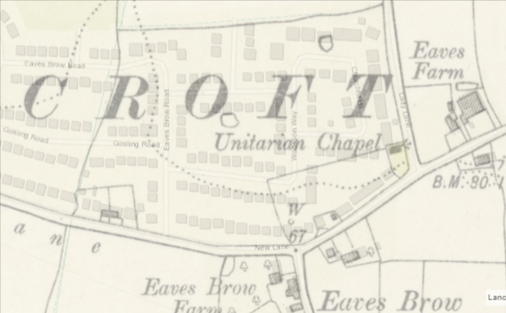 Map of the current housing estate, overlaid with a map of the same area from the early 1900's. 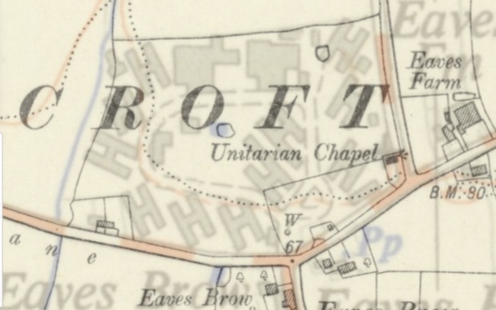 Map of the military camp which came before the current housing estate, overlaid with a map of the same area from the early 1900's.