The grass is cut by Warrington Borough Council every 6 - 8 weeks. It is far too long by the time they arrive and covers loose stones and bricks as well as rabbit holes, all potential trip hazards. When it is cut, the clippings are left as they fell, scattered across the ground. The paths and roadside are never cleared and the footpath is overgrown.
​
Litter and other rubbish are NEVER cleared or moved out of sight, apart from by volunteers. There are no bins for either green or general waste for at least two miles around the site.
Volunteers bring any water needed for cleaning and filling the bird bath as there is no water supply.
Trees and Shrubs are not maintained and are out of control. The sacred yew tree in the graveyard is actually TWO yew trees, left so long that they have merged with ivy and brambles into one huge mess, which blocks the only footpath.

At least one tree has been completely removed from the grounds and two more have been cut down. The parts cut down from the two trees have been dumped behind Row A of graves and are now entangled with Ivy.

There is no sign for the site, no contact details or any other information, apart from the temporary one placed on the gate by volunteers.
​
The Warrington Borough Council Website contains no reference to the existence of the burial ground.
​

Removal and Re-Positioning of Graves

The woman in charge told me in person that there were no burial records or plans existing for the cemetery. (There most certainly are and it only took me a few hours of research to locate them).
​
It is the responsibility of those in charge of maintenance to create a plan if they have no existing one -
​
A burial authority shall maintain a plan showing and allocating distinctive numbers to-
all graves or vaults in which burials are made after the coming into operation of this order or are known to have been made before that event.
The burial authority shall make and keep-
(a) a record of the tombstones and other memorials removed from graves, showing whether they have been destroyed or re-erected by them in the cemetery or elsewhere and if so re-erected of the positions in which they have been re-erected; and
(b) a photographic or other record of all legible inscriptions on the tombstones and other memorials destroyed.

When I saw her, she was taking a picture of grave F2, which even in 1971 was listed as 'badly worn'.
I asked what would happen with the grave now. I thought that she would explain the process of trying to contact owners or of an assessment to see how to prevent further damage.

She simply said 'We keep the photograph as proof in case anybody questions why it was removed.'

English Heritage state:
​
'The permission of the owner of the monument and their help with the costs needs to be sought before any works are undertaken. Monuments are privately owned. For many monuments, it will prove very difficult to find the current owner(s), but you must be able to demonstrate you took all reasonable steps to do so.'

I know for certain that Graves B1, B2, A6, A8 and F1 are missing, but were there in 1971 when the Monumental Inscription list and grave plan were made.
Part of  Grave C1 (War memorial) has been moved to occupy the space where B1 and B2 should be.
When they laid Grave C2 flat, they removed the separate marble stone with the couples daughter, Ann's details on and placed it in front of Grave F3 (completely unrelated). This could be because this grave also mentions a daughter called Ann - Maybe they thought nobody would notice?
There doesn't seem to be any record of the missing graves or the re-positioned ones, even though they should keep full and detailed records according to English Heritage, who state:

Any work carried out should be recorded and made available to others. This is so that the condition and any changes can be monitored in the future.
Good quality photographs are a quick and easy way of capturing this information. They should be taken before, during and after the work and should document key stages.
Written documentation outlining the work, methods and materials used, as well as who and when the work was undertaken.
All records should be stored with the cemetery or graveyard authorities and copies should be sent to the local Historic Environment Records.
When I requested a sign at the entrance from the Commonwealth War Graves Commision, the CWGC contacted the bereavement department at Warrington Borough Council and requested the details of the landowner to ask for permission to install a sign. The member of staff at first hadn't even heard of the Chapel and just said they 'didn't know'.
The CWGC then tried Croft Parish Council, who advised them to contact Warrington Borough Council.
With the assistance of Rev. David Steers, I was able to advise them of the owners in order to get permission.

Warrington Borough Council are also responsible for the maintenance at Risley Chapel. Fortunately, they have an arrangement with Birchwood Council, who generally do a good job of the upkeep. However the image below shows a comparison photo of the ground. One taken in 2010 and one taken in December 2021. The difference is quite shocking. 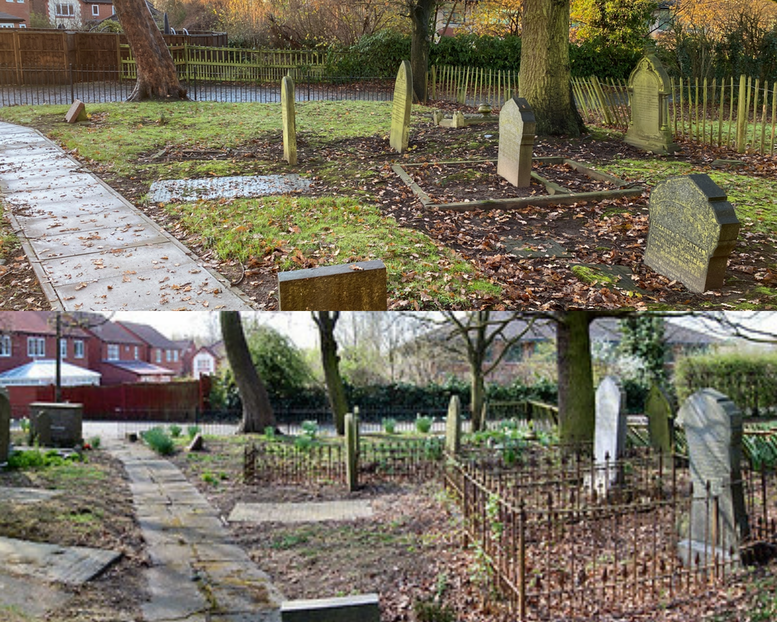 Risley Chapel in 2021 and as it was in 2010
You can see that the railings have been removed and at least two gravestones are half buried.
As with the burial ground at Croft, there are no signs or information available and the person in charge said there were no records available (which there are - I have a copy).
​Again, they must just assume that nobody will notice and gradually they will all disappear.

A History of Disrespect

Warrington Borough Council undertook a cull of gravestones from the district between 1960 and 1970. No care was taken and no thoughts were given to the people who lost the only monument they had to a loved one.
It seems that although laws and guidelines have changed and burial grounds are now considered of historical importance, Warrington Borough Council have continued with the attitude from the 1960's.
When deciding which stones to keep and which to discard, it all came down to how wealthy and/or famous the person who was buried there had been.

'About 400 of the more interesting and important stones which are being retained will be relaid, in addition to those monuments which have not been disturbed, as part of the landscape design for the old churchyard which is being carried out by Warrington Rural district Council in accordance with plans accepted by the Parochial Church Council. It is intended to place inside the church some of the best of the earliest stones.'

Extract from St. Oswald's Church Winwick, Monumental Inscriptions of the Church, the Churchyard and the new Burial Ground, 1971 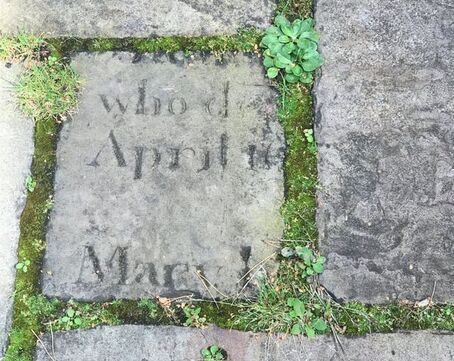 The footpath at Winwick Church
You may think that 400 is quite a lot to keep, but the piece states earlier that there were approximately 1640 gravestones.
Who decided which stones were 'interesting' and 'important'? I have no doubt that family members of each person will have thought each one was interesting and important. Those that had poorly made headstones which were worn and/or unreadable will have been removed because they couldn't afford a harder wearing stone. Unless, of course they were famous.
It seems though, that even then they didn't do any checks on what they were discarding -

'A note on page 152 of William Beamont's 'Winwick' states that the stone over Giles Chippindall's grave was once the base of the ancient cross. This was unfortunately not known to those clearing the churchyard in 1970, as being unmarked and quite plain it was thrown away.'

Extract from The Register of St. Oswald's Church Winwick, 1983

'Warrington Borough Council recorded information from the memorials at St. Elphins in 1960 as part of the graveyard clearance scheme. Just over 800 stones remain from the original 2200 plus, the majority of these having been re-positioned around the church.
Apart from one or two exceptions the only information recorded by the council were the names of the individuals, their ages and dates of death. It is not known what happened to the 1400 or so gravestones no longer visible.
At that time, church authorities and councils seemed to have little respect or concern for gravestones or their inscriptions, the ownership of which is still vested in the descendants of those recorded on the monuments.
At Winwick, for instance, many stones were thrown into a delph at Causeway Bridges after the clearance at St. Oswalds which took place around the same time.'

Extract from The Inscriptions of  St. Elphins, the Parish Church of Warrington, 2000

I hope Warrington Borough Council are reading this and that they are aware of the National Planning Policy Framework (NPPF)
The revised NPPF was published on 20 July 2021
A new Heritage policy (paragraph 198) has been introduced which states
​
“In considering any applications to remove or alter a historic statue, plaque, memorial or monument (whether listed or not), local planning authorities should have regard to the importance of their retention in situ and, where appropriate, of explaining their historic and social context rather than removal."