What One Woman Did

The Story of the Building of Croft Chapel

​In a simple working man's home in Warrington in the year 1778, there was born a daughter, Ellen Urmston. When but nine years of age she began work as "Maid-servant" in the home of the Rev. John Aspinal, minister 1762 - 1779, of Walmsley Chapel, from which he removed to Risley Chapel.
After a few years Mrs. Aspinal died and such was the care, foresight, prudence and industry manifested by the young servant, that Mr. Aspinal continued her in his service as housekeeper until her marriage with Farmer Yates of Croft, near Warrington in 1803.
Ten children were born to them, of whom six survived their mother.

In 1838 the Independants began a series of lawsuits to attempt to wrest certain chapels (in which Unitarians had long worshipped) from the descendants of those who founded and built them.
Risley was one in which they had succeeded, whereupon Farmer Yates and Ellen his wife opened their house for divine worship on Sundays, and for nigh twelve months, Edward Robinson Dimmock (died 1867, he married the widowed mother of William Gaskell), minister of Warrington, and supplies carried on these services.
One of the supplies was Henry Fogg (1802-1886) minister of Ormskirk, who gives a charming word picture of the scene during Service in the farmhouse, and of Ellen Yates, "in the singing of the last hymn she put the kettle on for tea. We made a collection in one of her best saucers."

She was no ordinary person was Mrs. Yates. In her own mind she was determined that a Chapel for Unitarian worship should be erected for the dispossessed Risley congregation of which she was a member. What Happened?

With no other influence than that of a devoted heart, she successfully visited Bolton, Bury, Chowbent, Dukinfield, Gorton, Hindley, Hyde, Liverpool, Manchester, Rivington, Walmsley and Warrington-her husband helped her in Gorton, Hyde and Manchester- and suucceeded in collecting just £500 for the purpose. How did she do it?

To save expense she often walked great distances in these journeys, not infrequently returning home tired, and wet at nine, ten, eleven and at times twelve o'clock at night. On one occasion, after spending a busy and successful Saturday in Manchester, she missed her last conveyance home, but rather than not be in her accustomed place in the Sunday meeting in her own house, she resolutely determined to walk the whole distance-about eighteen miles-and reached home about two o'clock in the morning.

The site in Lady Lane, croft on which the Chapel stands was given by Mr. Blackburn, who had property near Risley, and the land also supplied clay for the bricks.
Many of the congregation helped the workmen as opportunity served, and in less than one year the Chapel and School-room were erected.

The opening services on September 27th, 1839, were conducted by James Martineau (the minister of Paradise Street Chapel, Liverpool) and John Hamilton Thom (then minister of Renshaw Street Chapel, Liverpool).
The substantial collections made, together with a balance of subscriptions collected by Mrs. Yates, produced a small endowment for the carrying on of the services.

For eleven years until her death, on September 11th, 1850, aged seventy-two years, Mrs. Yates was a constant attendant at the Chapel. She taught in its Sunday School until growing infirmatives kept her at home. Her eyesight declined and she became blind and then cancer claimed her life.

Ellen's work was done, nobly done, and she passed on to Higher Services in the Nearer Presence.

On the wall in Croft Chapel near the door, a Marble Tablet preserves the memory of Ellen Yates. The services have been continued at Croft Chapel since 1839.

A Yates' gift of £100 is invested, and the interest is used in arranging for the preachers who conduct the Sunday services. This is in addition to the Ellen Yates' endowment.
Ministers from Warrington, Chowbent and Leigh, and lay preachers in the district, keep up a regular supply for the pulpit.
At the present time money is being raised for the renovation of the Chapel and a revived interest in the work which has been carried on for nearly a century. 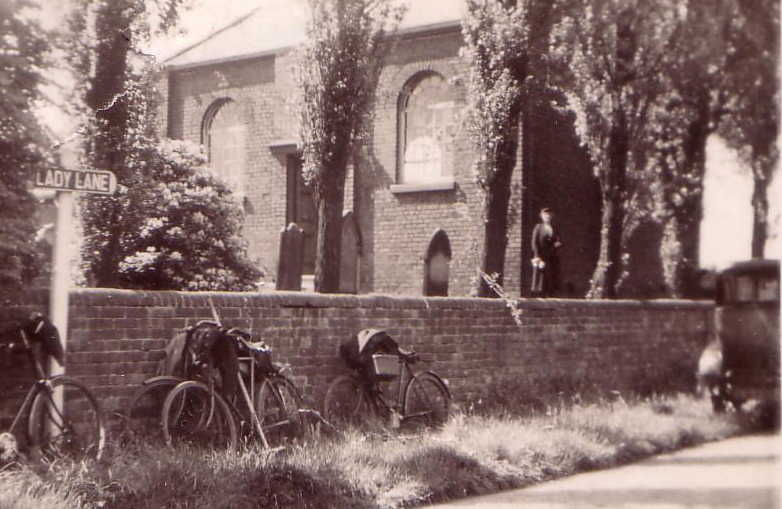 Ellen Yates' Great Grandaughter, Ethel, stood outside the Chapel in 1948.
Ellen is most definitely a woman not to be forgotten.
Read The Yates Family Story
​
The memorial mentioned in the above story was rescued by a Mr. Ingham when the chapel was demolished and placed in the burial ground of Christ Church, a little further down Lady Lane. I had never noticed it on my many visits to Christ Church and so decided to check the Monumental Inscription list, completed by John Bulmer in 1983.
It was clearly listed as being between grave A1 and Lady Lane. I went straight there to see what i could find. Ivy is all I could see at the described location. I spent a couple of hours moving the ivy, helped by- I found out later- Mr. Ingham's daughter, who was with a group doing a monthly tidy up of the grounds. She kindly lent me her larger spade and I felt through the soil that there was something solid underneath. I managed to scrape it all clear and reveal the white marble tablet. It doesn't look very white anymore, after so long hidden underground, but each time I give it a clean, It gets a little brighter. 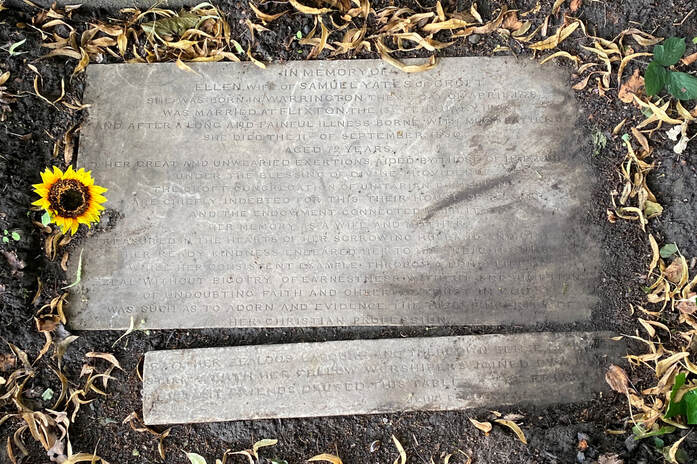 The Ellen Yates memorial stone, now at Christ Church, Croft
IN MEMORY OF
ELLEN, WIFE OF SAMUEL YATES OF CROFT.
SHE WAS BORN IN WARRINGTON ON THE 5TH DAY OF APRIL 1778
WAS MARRIED AT FLIXTON, THE 13TH FEBRUARY 1803
AFTER A LONG AND PAINFUL ILLNESS BORNE WITH MUCH PATIENCE
SHE DIED THE 11TH SEPTEMBER 1850
AGED 72 YEARS
HER GREAT AND UNWEARIED EXERTIONS AIDED BY THOSE OF HER HUSBAND
UNDER THE BLESSING OF DIVINE PROVIDENCE
THE CROFT CONGREGATION OF UNITARIAN CHRISTIANS
ARE CHIEFLY INDEBTED FOR THIS THEIR HOUSE OF PRAYER
AND THE ENDOWMENT CONNECTED WITH IT
HER MEMORY AS A WIFE AND MOTHER
TREASURED IN THE HEARTS OF HER SORROWING HUSBAND AND CHILDREN
HER READY KINDNESS ENDEARED HER TO HER NEIGHBOURS
WHILE HER CONSISTENT EXAMPLE THROUGH A LONG LIFE OF
ZEAL WITHOUT BIGOTRY, OF EARNESTNESS WITHOUT PRESUMPTION,
OF UNDOUBTING FAITH AND CHEERFUL TRUST IN GOD
WAS SUCH AS TO ADORN AND EVIDENCE THE DEEP SINCERITY OF
HER CHRISTIAN PROFESSION.
TO COMMEMORATE HER ZEALOUS LABOURS AND THEIR OWN SENSE OF HER GREAT CHRISTIAN WORTH
HER FELLOW WORSHIPERS JOINED BY A NUMEROUS
BODY OF DISTANT FRIENDS CAUSED THIS TABLET TO BE ERECTED
BEING DEAD SHE YET SPEAK