The Story of Richard Yates - Part One

​When Richard Yates was born in 1817 in Croft, Lancashire, his father, Samuel, was 34 and his mother, Ellen, was 39.
He was baptised at Risley Presbyterian Chapel on 11th July 1817.
In 1840 he married Mary Green.
In 1841 he is living at Stone Platt in Croft with his wife Mary and their daughter Ann, who is 1 week old. Richard is listed as a silk weaver.
His son John was born in 1843.
Richard’s wife Mary passed away on 28th October 1844 and was buried at Croft Unitarian Chapel in Grave C7.
In 1851 Richard is living on lady lane with his two children and is listed as a Butcher.

In 1861 they are living at The Row, Culcheth. Richard is listed as a ‘Farmer of 14 acres and Butcher employing 2 labourers’. Ellen is listed as ‘Farmer’s Wife’. John is ‘Farmer’s Son’, and the other two children are scholars. Richard’s brother Joseph Yates is also there, listed as a carter and a female servant, Ann Waywell aged 19.

Robert Yates, son of Richard and Ellen, sadly died aged 3 in 1863. He was buried at Croft Unitarian Chapel in Grave C7.

​In 1871 their address is 26 Market Street, Leigh (see image). Richard and his son John are shown as pork butchers. Ellen’s occupation is blank. Fanny is still a scholar. There are two servants listed as well. 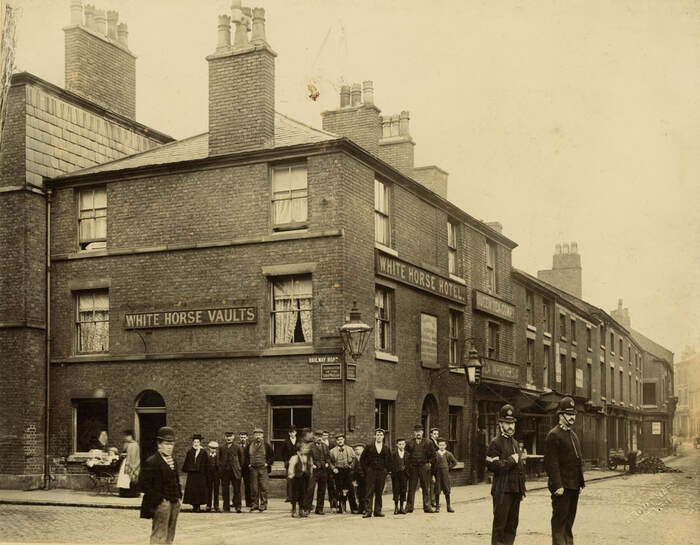 Market Street, Leigh. Number 26 is on the far right near the man with a wheelbarrow. This row was demolished around 1899. Picture courtesy of Wigan and Leigh Archives.
Richard’s second wife Ellen passed away on 1st August 1878 and was buried at Croft Unitarian Chapel in Grave C7.

In 1881 he is living back at The Row, Culcheth as a ‘Farmer and Butcher of 15 acres employing 3 labourers’. With him is his granddaughter Mary, aged 15. She is shown as a domestic servant.

In 1883, John, the son of Richard and Mary died. He was buried at Croft Unitarian Chapel in Grave C2.

YATES Richard
Personal Estate £896 19s. 9d.
​
The Will with a Codicil of Richard Yates formerly of Culcheth but late of Market- street Leigh both in the County of Lancaster who died 14 October 1890 at Market- street was proved at Liverpool by James Yates of 26 Market- street Pork Butcher the Son and Enoch Sankey of Rowe Farm Culcheth Farmer the Executors.