The Story of Richard Yates - Part Two
​His Children Ann, John and James

Ann and John: Richard's Children with Mary
​
Ann married James Birchall on 14 November 1861 at Newchurch Parish Church. They had seven children in 15 years. She died on 7 August 1884 at the age of 43. They are both buried in Grave B4 at croft Unitarian Chapel.
Their daughter Annie was one of the last burials at Croft Unitarian Chapel. She died on 3rd March 1956 and is in Grave G1 (See image)

John married Ann Waywell on 26 December 1864 in Warrington. If you look back previously, Ann was listed as the ‘servant’ living with the family on the 1861 census. They had six children in 18 years. He died on 20 January 1883 at the age of 40. Ann died on 22nd June 1921. They are both buried in Grave C2 at Croft Unitarian Chapel. 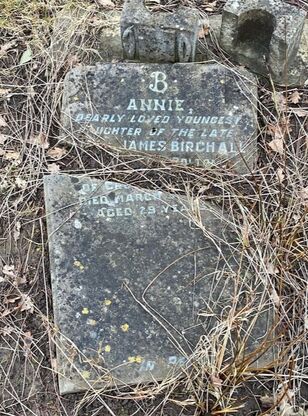 ​James married Ann Tonge in Bolton on 28th June 1871.
In 1878 he has taken over the butcher’s shop from his father at 26 Market Street, Leigh.
The business seems very large and successful.

'Leigh Butcher’s Christmas Show- In accordance with custom the butchers of Leigh had their usual display of beasts, pigs and sheep on Tuesday evening, and some of the sights were really grand. Mr. James Yates, pork butcher, had no fewer than 78 fine pigs hung round his shop, three of them being prize-winners at the Chester Cattle Show last week. His window was also tastefully decorated with farmers’ geese, 55 in number, in the centre being two fine sucking pigs.'

In the 1881 census, they live there with their two daughters, two sons and two servants.
They are still there for the 1891 census and have had another daughter.

The Leigh Market Street Improvement Scheme meant that the shop was to be demolished in order to widen Market Street. James sought around £11000 in compensation for the effect moving would have on his business.
He was awarded £5482. (The Leigh Journal Friday 2nd September 1898)
The business moved to 9 King Street, Leigh and opened on Friday 2nd December 1898. 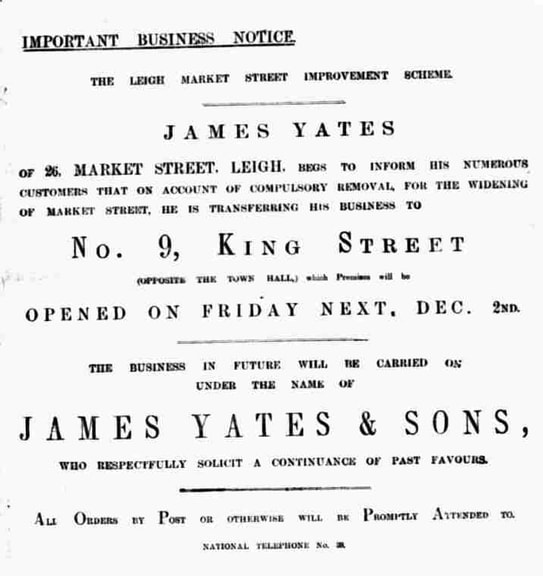 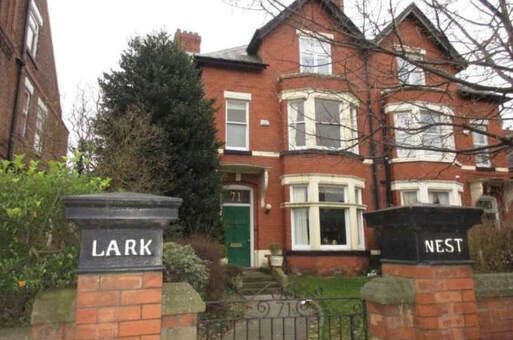 The death of James was announced in The Leigh Chronicle on 1st March 1912.

We regret to announce the death, yesterday afternoon, at his residence, "Lark Nest", Leigh, of Mr James
Yates, head of the firm of Messers. James Yates and Sons, pork butchers, Leigh.
The deceased gentleman, who was 60 years of age, had been ailing for several months, and had been
under the care of Drs Gray built and Jones.
A thorough business man, a gentleman who by hard work and great perseverance had built up an
excellent business, a staunch friend and genial companion, he will be much missed by a large circle of
friends.
It is now about 40 years since he commenced business in Leigh. For many years he kept a large
establishment on the west side of Market Street, but when the property on that side was taken down for
street widening purposes, the offices and slaughterhouses were removed to Bengal Street, and the shop to
King Street. He took no part in politics, but was a staunch Churchman. It will be remembered that Mrs
Yates, who was a sister of Mrs TD Harrison, died in 1900.
He leaves two sons and two daughters. Mr Yates was the son of Mr Richard Yates, farmer, of the Row
Farm, Culcheth. He devoted the greater portion of his time to his business, and though interested in
municipal affairs never sought election on the Town Council. He was fond of motoring, but preferred the
company of his friends to sports and pastimes.
It has been arranged for the funeral to take place on Monday at noon at Leigh cemetery.

James was buried with Ann at Leigh Cemetery.