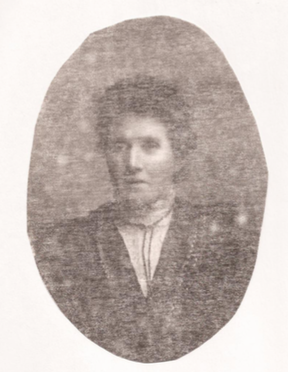 Over the next ten years they have another four daughters, Elizabeth, Margaret, Lilian and Annie, and a son, James.
In 1891 they are living at 17 Railway Road, Leigh and Joseph is now a pork butcher.

Click here to read the childhood memories of Anne Yates

Fanny Yates married Charles Henry Roberts at Newchurch, Culcheth on 26th June 1879.
Their daughter Helen (Ellen) was born in 1880 and Ethel in 1881.
The 1881 census shows they live at 15 Market Street, Leigh and Charles is a Butcher.
They have a son Richard in 1887 and Edgar in 1890.
In 1891 they are living at 454 Leigh Road, Atherton (where her brother and his family were living ten years earlier). Charles is still shown as a butcher.
Their daughter Fanny was born in 1895 and they had a son Reginald in 1899. Reginald sadly passed away aged 3 months and was buried in Leigh Cemetery,

​In 1901 they are living at 32 Leigh Road, Atherton.
In 1911, they are living in Leigh at 19 Jaffray Street. Charles is a machine painter at the iron works. Daughters Ellen and Fanny are both at home and sons Edgar and Richard are listed as workers. Richard is a butcher and Edgar is a carter.
Daughter Fanny is shown as 'Feeble-minded through fits since one year old'.

Charles passed away on 23rd June 1911 and was buried in Leigh Cemetery with their son.
Fanny their daughter died at the age of 21 on 27th March 1916. She was buried at Leigh Cemetery.
In 1921, Fanny is living in Leigh with her son Edgar, daughter Ethel and grandaughter Dorothy.
The information is the same in the 1939 register.
​Fanny passed away on 19th January 1940 and was buried with her family at Leigh Cemetery.
​Her death was announced in the local newspaper.
Robert Yates, as told in Part 1, lived a very short life. He was born in 1860 and baptised at Croft Unitarian Chapel on 8th April that year. He was listed with his family on the 1861 census at The Row, Culcheth. He sadly passed away on 15th October 1863 and was buried three days later at Croft Unitarian Chapel.