The Building of Risley Chapel in 1707

For all Christians living in Risley or Croft before the 18th Century, the local church was St. Oswald’s Church at Winwick. Roman Catholics worshipped at Southworth Hall and Culcheth Hall.
The Act of Uniformity in 1662 required all clergy of the Church of England to assent to the Book of Common Prayer. Those who refused to do so were called ‘Non-Conformists’ or ‘Dissenters’. The act also prevented persons who were not of the established church from holding any office, either in the church, in a corporation or even in a college.
Church attendance was compulsory at the time and from 1678 onwards, dissenters were fined 2s each for not attending Winwick Church services.
James Culcheth of Culcheth Hall, his wife and several of his Culcheth tenants were presented for being conventiclers (Holding unauthorised or illegal religious meetings) and disaffected to the Church of England.
Roman Catholics Thurston Arrowsmith and his wife, Ralph Kay, Will Arrowsmith, Richard Booth and Richard Kerfoot and his wife, all of Croft were also presented.
In 1671 James Bate of Croft Eaves, John Bate, Thomas Pilling, Richard Birchall and James Bate of Croft Heath were presented, as was Quaker Geoffrey Flitcroft.
In 1689 a Toleration Act was passed, allowing dissenters to have their own meeting places. Clergyman Rev. Thomas Risley then registered Richard Jackson’s barn at Croft as a meeting house and began preaching to supporters from there. By 1707, the congregation was thriving, and they built a chapel on Thomas Risley’s own estate (on a piece of land called Fifty Croft) at Cross Lane, Risley.
The trust deed is dated 25th March 1707 and is a contract between Thomas Risley, his wife Catherine, his son and heir apparent Thomas Risley, of the one part and John Glave, Peter Dorning, George Monks, William Birchall of the other part. 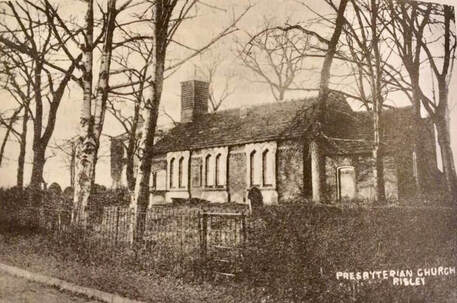 Risley Presbyterian Church
Thomas Risley died in 1716. His tomb is a box monument and is still intact at the site today. The inscription is not the original, as this had already worn away by 1876. In 1883 the surviving inscription was added by Rev. William Dunn.

Here Interr'd the Body of the Rev'd. Thomas Risley MA Oxford. He left the Church of England in 1662 and built Risley Chapel in 1707, where he officiated up to his death. He died in 1716 aged 86 years.
THE RIGHTEOUS SHALL BE IN EVERLASTING REMEMBRANCE 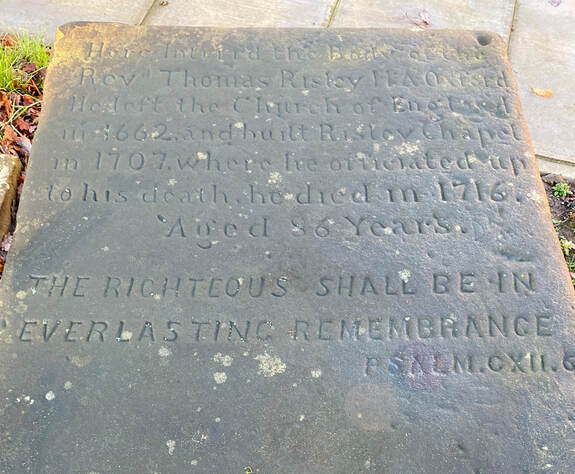 The grave of Thomas Risley
During the later years of the 18th Century, the congregation turned towards Unitarianism and were eventually ejected from the chapel. This led to the building of Croft Unitarian Chapel.

The ejection of the Unitarians from Risley also led to the building of another chapel, on the other side of the world.
John Monks had lost his wife and had the opportunity to travel to Australia in 1839 with his sister Alice and her husband Francis (Previously a home missionary in the Salford Church).
John vowed that if God prospered him in his new country, he would build a church. He did prosper and built
Shady Grove Unitarian Church.
The original building still stands and still holds Unitarian church services.

​​Read The Story of John Monks in full.

The Manse was built in around 1842 and was a large and elegant Georgian style building. The school was built under the ministry of William Forster between 1844 and 1858.
In 1968, the church came under threat from the building of the new M62 motorway. The motorway was planned to run through the site of the manse and very close to the chapel building, too close for it to be safe.
The last service was held on Sunday 26th September 1971 and both buildings were demolished.
A new church was built for the congregation in Locking Stumps and was named The Thomas Risley Church.
The burial ground was left and a stone erected marking the site of the church (see header photo).
​The Risley War Memorial is made with a triangular stone which topped the clock at the nearby school before it was demolished.
The whole site is listed with Heritage Gateway and is a historic monument. 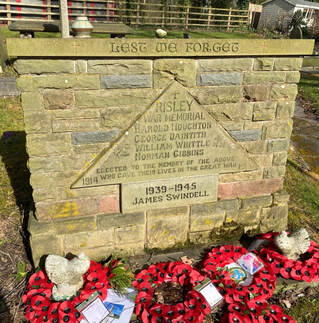 Read about the Graves at Risley Chapel