The Building History and Architecture

St Oswald's church is a Grade I listed building.
​A church at Winwick is recorded in the Domesday Book. The earliest parts of the present church are the bases of the north arcade which date from the early 13th century, and the walls of the Legh Chapel and the organ chamber which are dated 1330. The west tower was built in 1358, and the walls and north arcade of the nave (except for the Legh Chapel and the organ chamber) date from 1580. The south porch was added in 1720, and the south arcade of the nave was rebuilt in 1836 reusing earlier stones.
​The chancel, sanctuary and vestry were rebuilt by Pugin in 1847–49 for the 13th Earl of Derby.
The spire was rebuilt and the church was restored in 1869 by the Lancaster partnership of Paley and Austin.
Much damage had been done to the church in 1648 when Oliver Cromwell stationed his troops in the church after the Battle of Red Bank.

The new burial ground, which was opened in 1922, lies to the north of the churchyard, though separated from it by Church Walk.
The architect’s plan in the vestry shows the ground divided into rows of grave spaces, 44 to a row.

The church is built of sandstone with a metal, stainless steel, roof. Its plan consists of a west tower, a nave of six bays with a clerestory, north and south aisles, a south porch, a chapel in the east bay of each aisle, a chancel and sanctuary of three bays, and a north vestry. The south chapel is the Legh Chapel and the north chapel belonged to the Gerard family.

The tower is in three stages and has a recessed spire.
On the west face is a door above which is a three-light window. On each side of the window are niches containing restored statues of Saints Anthony and Oswald. To the right of Saint Anthony is a carved pig.
On the west and east sides are clock faces.
Above these are two-light bell openings; the parapet is crenellated. The parapet of the north aisle is plain; that of the south aisle is crenellated. On the west gable of the chancel is a bellcote. 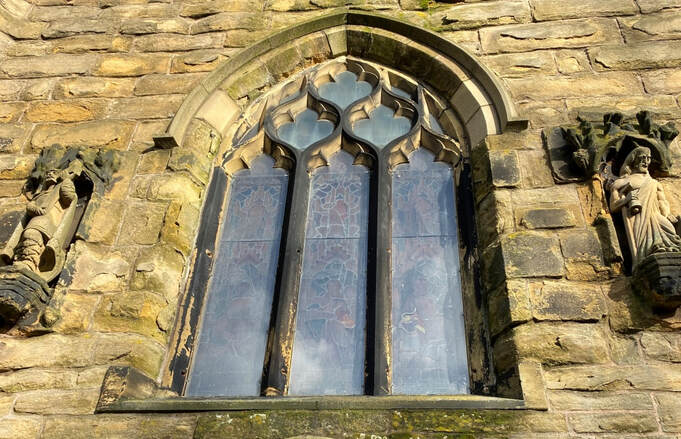 West face of the tower with Saint Oswald (left) and Saint Anthony (right)
A mounting block is located on Swan Green, outside the church, at the intersection of the main roads. It is formed from a monolithic piece of sandstone, and has retained a clear inscription. It is Grade II listed. 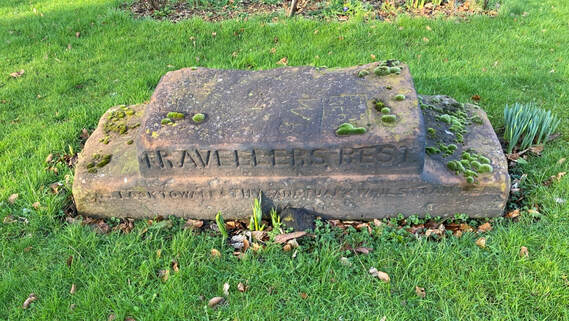 The nave and aisles have camber beam panelled oak roofs dated 1711. The Legh Chapel has a 16th-century panelled roof. In the Legh Chapel is a brass to Sir Peter Legh dated 1527. Also in the chapel are monuments to other members of the Legh family, including one to Mrs Ellen Legh who died in 1831 by R. J. Wyatt.

In the Gerard Chapel is a damaged font, dating from the fourteenth century, and a brass to Peter Gerard who died in 1495. Beneath the floor of this chapel is the family vault but this has not been used since the Reformation. At the east end is a communion table dated 1725. On the north wall is an aumbry.

On a window-ledge in the Gerard Chapel is the cross-arm of an Anglo-Saxon preaching cross dating from around 750.
(The base of this cross was sadly thrown away by Warrington Borough Council).
​
These items must have been placed indoors for protection, as they were outdoors according to Henry Fishwick in 1909.

Outside, beneath the east window of Winwick church and by the side of the remains of the once beautiful Saxon cross, lies a fragment of the bowl of the old font that was discovered beneath the tower of Winwick church during the restoration in 1877. It is octagonal in shape, and each face is covered with a diaper pattern of a carefully carved modification of the rose ornament with a central boss, but now so worn down as to be distinguished only with difficulty. The character of the ornament appears to point to this being a font of the fourteenth century. Fonts of this period are, by comparison, decidedly scarce. 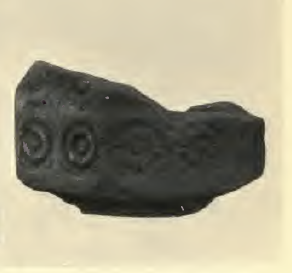 Fishwick also mentions the ancient Rood Loft remains, which were clearly carefully preserved as of 1909, but it is unclear from the various modern descriptions of the interior whether it is still in place.

Attached like a frieze to a wall in the vestry, is preserved a valuable relic of the ancient rood loft. It consists of a large section of the breastsummer, or beam, that, forming the lowest member of the projecting front, supported the superstructure, or parapet.
The history of it is this. At the time that the rood loft perished this timber was chosen to be utilised in the constructing of a dwelling house near the east end of the church, to which fortunate chance is to be ascribed its having been saved, whilst all the rest of the rood loft to which it had belonged met with destruction. In this situation, then, the breastsummer remained for a great number of years. It was not hidden from view, for its presence became known to antiquaries in the neighbourhood, who kept an eye upon it until, some ten years ago, the group of cottages into which it had been built was demolished.
It was then recovered for the parish, and fixed for safety in its present position in the church. The existing length, 15 feet 2 inches, clearly represents but a portion of the original dimension. And yet, fragment though it be, its importance it would be difficult to over-rate. Not only does the bold relief of the ornament, all cut from the solid, constitute a handsome decoration in itself, but, further, it is of such architectonic character as to afford an index of the general design of the loft front.
Waving stems of vine, with leaves and grape bunches starting from under a central bracket-corbel, expand at regular intervals into lesser corbels. Of these the greater portion of five on either side of the central corbel are left; but it is certain that, when complete, the breastsummer comprised more of them, possibly making a total of six on either hand, to support statues of the twelve Apostles with a figure of our Lord in the midst. At fixed intervals, i.e., half-way between the brackets, the stem breaks out into a smaller group of leaves. From the latter, which have a slight projection, vertical divisions would run up between the statues to divide the loft-front into a series of panels, or niches, each crowned with tabernacle work overhead to correspond with the brackets at the foot.
Along the top of the breastsummer, a short way from the back, a narrow groove running from end to end has been sunk. The object of this was to take the bottom edge of the flat boarding that would form the background to the figures.
Would only that Pugin had known of this breastsummer! For the modern chancel-screen, designed by him, is an entirely conjectural affair, much too light and pretty to be accepted as a substitute for the screen that must actually have stood here in the past, as the massive grandeur of the recovered breastsummer abundantly proves.
​There is nothing like the Winwick breastsummer in the county, but another example in situ at Mobberley, in Cheshire, bears enough similarity to it to suggest that the design of both may possibly have been the outcome of some local school or tradition.​

The pews, furnishings and glass in the chancel and sanctuary were designed by Pugin.
​The timber screen between the nave and the tower was erected in 1920 as a First World War memorial. The organ was built around 1838. The ring consists of six bells. Five of these were cast from the four existing bells in 1711 by Richard Sanders, and the sixth in 1882 is by John Taylor and Company.

The Winwick Broad Oak was a national landmark until it’s destruction in a gale on 4th February 1850. It is said that 1000 soldiers once sheltered under it’s branches which spread 99 feet (30 metres) from north to south.

​In 1811 a public dinner was held beneath it to commemorate the heroic actions of local celebrity Admiral Sir Phipps Hornby in capturing a French vessel during the Napoleonic War. 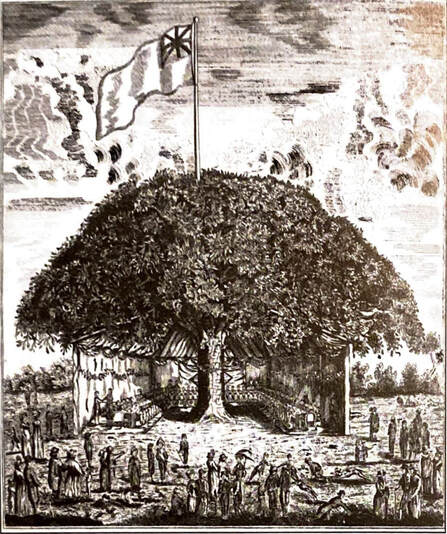 About 1 mile to the north of the church in a field alongside the road between Winwick and Golborne at Hermitage Green, is a holy well on the supposed site where Saint Oswald was killed at the Battle of Maserfield.
It is lined with medieval stonework and is covered by a protective stone slab.
The well is a scheduled monument and is Grade II listed.

The parish church of Winwick stands near that miracle-working spot where St. Oswald, King of the Northumbrians, was killed. The founder had destined a different site for it, but his intention was overruled.
Winwick had not then even received its name, the church being one of the earliest erections in the parish.

The foundation of the church was laid where the founder had directed; and the close of the first day’s labour showed that the workmen had not been idle by the progress made in the building. But the approach of night brought to pass an event which utterly destroyed the repose of the few inhabitants around the spot.

A pig was seen running hastily to the site of the new church; and as he ran he was heard to cry or scream aloud, “We-ee-wick, we-ee-wick, we-ee-wick.” Then, taking up a stone in his mouth, he carried it up to the spot sanctified by the death of St. Oswald, and thus employing himself through the whole night, succeeded in removing all the stones which had been laid by the builders.

The founder, feeling himself justly reproved for not having chosen that sacred spot for the site of his church, unhesitatingly yielded to the wise counsel of the pig. Thus the pig not only decided the site of the church, but gave a name to the parish.
In support of this tradition, there is a figure of a pig sculptured on the tower of the church, just above the western entrance; and also the following Latin doggerel;-

Taken from 'Legends of Old Lancashire' 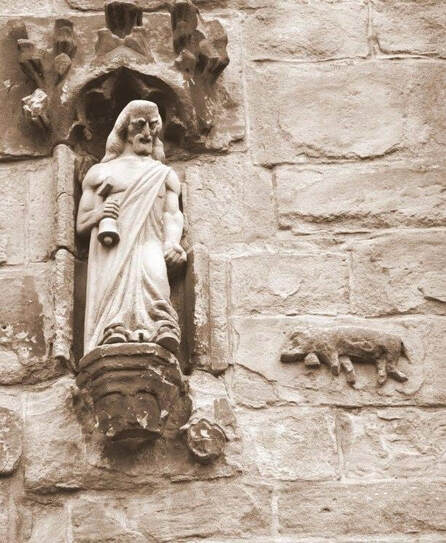 The church at little Winwick,
It stands upon a sod;
And when a maid is married there,
The steeple gives a nod.

Alas! How many ages
Their rapid flight have flown,
Since on that high and lofty spire
There’s moved a single stone!

Taken from 'The Legends of Old Lancashire'

The Captain of the Titanic, Edward John Smith, got married at St Oswald's Church to Sarah Eleanor Pennington on 13th January 1887.
​Sadly, he perished along with over 1,500 others in 1912 when the Titanic sank. 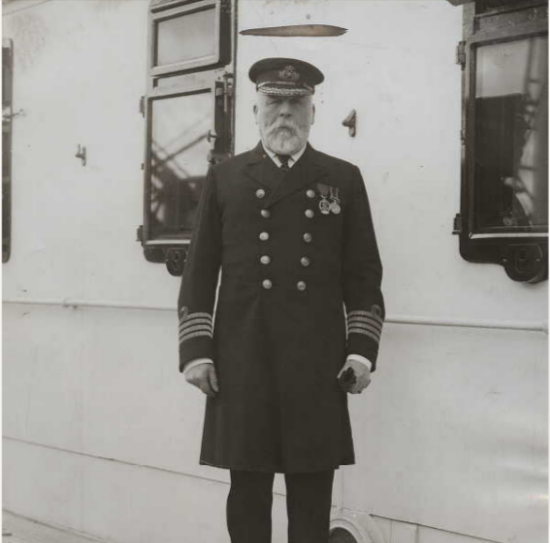